This Is a Job for ‘Senior Move’ Managers 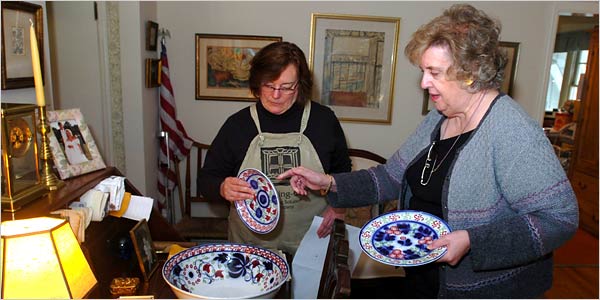 WHEN Sally and Harold Lion decided to sell their home of 43 years in Springfield, Va., and move to a retirement complex a few miles away, Mrs. Lion thought she had worked out an orderly transition process.The couple picked out the furnishings and belongings they wanted and sent them to their new apartment. Then Mrs. Lion, 78, planned to sort through the remaining contents in the house to decide what could go to charity and what could go elsewhere. But after spending several weeks trying to make a dent in the clutter, she felt stymied about what to do.“You can spend hours going through one little box,” she said.

Finally she turned to Busy Buddies, the same local company that had helped her choose what to take to her new home. The company is one of an increasing number of “senior move management” businesses offering services to retirees who are moving and must sift through the detritus of a lifetime.

Busy Buddies helped Mrs. Lion go through her leftover possessions, supervised the sale of some items, rented a paper shredder and packed 45 boxes for charities to haul away. They also offered advice.

“They said, ‘Tell your children they have until this date to come and get the things they want,’ ” Mrs. Lion said. Above all, they left her with an empty house.

As the comedian George Carlin once said, “A house is just a pile of stuff with a cover on it.” When people downsize, selling a house is usually not as difficult as dealing with its contents.

The sheer amount and sentimental meaning of “stuff” stashed in attics and basements often confound older people or children whose elderly parents die or fall seriously ill. Picking through possessions, dividing them fairly and discerning what has monetary value and what does not can be a mammoth job, especially if it’s done under duress or during a time of grieving.

Busy Buddies is one of 120 companies that belong to the National Association of Senior Move Managers, a group that requires members to follow a code of ethics; businesses must carry insurance and provide references.

Typically, these companies use a floor plan of the new home to help older clients make room-by-room decisions about what to move. They then help clients sort through their other belongings and recommend estate-sale specialists, appraisers and auction houses as well as charities that will accept donations. Many companies offer packing and unpacking services. They also assess what is trash and how best to get rid of it.

People who use such services can spend $1,500 to $5,000, depending on the selections and nature of the move.

Ron Butler, a real estate agent in Virginia Beach, tells clients that it is generally worthwhile to hire professionals for the downsizing process. He still regrets the hasty decisions he made when he cleaned out his parents’ home after they died.

“They were people who lived through the Depression, and they saved everything — broken transistor radios — in case they ever needed a part,” Mr. Butler said. At the time, he felt inundated and threw or gave away things he could have sold.

Nancy Loyd and Mary Ann Brewer, the founders of Busy Buddies, said about three-quarters of their clients were elderly people, but they were getting more and more calls from empty-nest couples in their 50’s who are moving from suburban homes to smaller city apartments.

Many older customers are caught in a vortex of emotion and confusion about where to start and what to keep. “What we hear a lot is, ‘My kids work full time, they’re really busy and they don’t want anything,’ ” said Margit Novack, who in 1996 founded Moving Solutions, a company in Havertown, Pa., that specializes in moving retirement-age people and has franchises in the mid-Atlantic region.

Experts say the best approach is to plan ahead. Of course that is easier said than done, as contemplating the breakup of a household can cause conflict within the family and bring up thoughts of mortality.

The University of Minnesota Extension Service, a statewide community education system, developed a program called Who Gets Grandma’s Yellow Pie Plate? The program helps guide families through the process in a structured way. Its Web site,Yellowpieplate.umn.edu, offers free materials (like articles and tip sheets) and also sells workbooks and videos.

Extension instructors urge older people to gather relatives or talk with them separately to determine what belongings have meaning to them. Jewelry, art or antique furniture can be earmarked or itemized in a will, but knickknacks might have emotional value.

Program worksheets ask what things family members would like to receive and how they would feel if they did not get a particular item. The questions are loaded but useful in averting future problems, said Mary Anderson, an Extension educator. “There are families not talking to each other because of a $2 Christmas ornament,” she said.

Families also are encouraged to discuss the history of items before the stories die with their owners.

Sunny Schlenger, an organizing consultant and the author of “Organizing for the Spirit: Making the Details of Your Life Meaningful and Manageable,” considers that history essential. To illustrate the point, she opens workshops by showing a photo of one of her ancestors. She asks people if they know who it is. As they shake their heads no, she says, “Neither do I.”

Ms. Schlenger, who lives in New Jersey and Arizona, began her career organizing closets and has worked with large and small businesses. In an essay on her Web site,Suncoach.com, she describes the looming predicament for aging baby boomers who “now live in their house happily surrounded by their own Stuff, their parents’ Stuff, and their kids’ Stuff.”

She suggested weeding through things at least every five years. “Think, who am I today? What do I really need? Do I really want to be the custodian of all these things? Who else would want them?” Ms. Schlenger said. “Start the conversations early with your siblings and your kids.